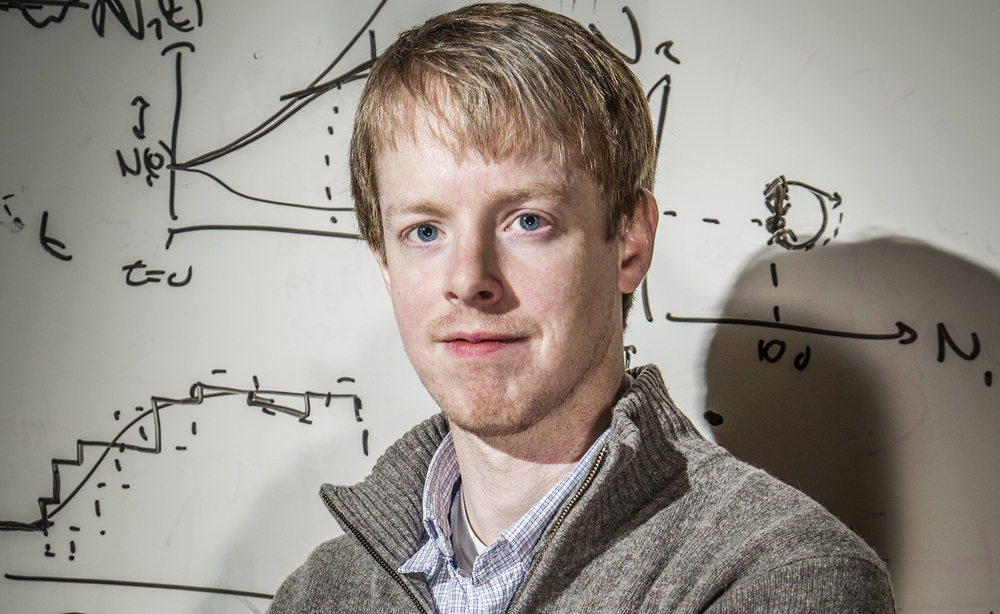 The results, published in PNAS, reveal microbial family trees with distinct evolutionary patterns that may one day help us understand how harmful microbes evolve.

While teaching a class on coarse-graining methods in physics, James O’Dwyer realized that the technique could be used to understand how microbes evolve over time. The results, published in PNAS, reveal microbial family trees with distinct evolutionary patterns that may one day help us understand how harmful microbes evolve.

“The species concept is difficult for microbes,” said O’Dwyer, pictured, an assistant professor of plant biology and member of the Carl R. Woese Institute for Genomic Biology at the University of Illinois. Microbes typically reproduce asexually, which makes it difficult to use the traditional biological species concept, which defines species as organisms that can reproduce together. Ecologists and microbiologists have often lumped microbes with similar DNA sequences together as effective, `operational’ taxonomic (or classification) units.

In this paper, O’Dwyer and co-authors Steven Kembel from the Université du Québec à Montréal and Thomas Sharpton from Oregon State University have sorted these sequence data into a new kind of family tree, that displays sudden bursts of diversification. This is likely the first time that coarse-graining, a physics principle, and Λ-coalescents, a set of mathematical models, have been used to address questions in ecology.

When diversification happens relatively quickly, and multiple lineages have similar genes, a branch could appear to split into multiple branches, instead of just two. Ordinarily, biologists would try resolve this ambiguity, by figuring out the order in which lineages diversified.

Introducing a new phylogenetic tree
“In this paper, the lack of knowledge [about microbial taxonomy] is treated as a virtue,” O’Dwyer said.

Using phylogenetic trees to understand diversification is like using Google Maps to understand automobile travel, said O’Dwyer. You can zoom in to look at detailed information, studying individual city streets, or you could zoom out to look at the bigger picture of how people are moving across the state using interstates.

So far, ecologists have typically used phylogenetic trees that are “zoomed in” to show all the branches. In this paper, coarse-graining condenses many short binary branches into large nodes that suddenly split into multiple branches, resembling the tines of a fork.

The result is a simpler, “zoomed out” tree that shows bursts of diversification over time. These bursts were found in phylogenetic trees created for 22 microbial communities, chosen to represent a breadth of habitat types: plant, marine, and human gut and skin.

“They provide us with an echo of real ecological processes, like adaptive radiations, when an organism rapidly diversifies due to a change in environment or to fill a new niche,” O’Dwyer said. “And these bursts are there throughout these phylogenetic trees, deep within their history.”

Finding an ecological theory that fits
The authors tried to use a controversial ecological theory (called neutral theory) to quantitatively describe these patterns. According to this theory, all species are selectively equal; population success or failure is random, like the flip of a coin. Neutral theory trees exhibit gradual diversification, rather than sudden bursts. Instead, they found another family of mathematical models, called Λ-coalescents, are better able to describe the unique patterns of diversification.

These ecological patterns may help us understand the diversification of harmful microbes. The same patterns may also be found in other parts of the tree of life, helping us to understand when and how new species evolve over time.

This paper was made possible with support from the Templeton World Charity Foundation, Canada Research Chairs program, Natural Sciences and Engineering Research Council of Canada, and the Gordon & Betty Moore Foundation. O’Dwyer was recently awarded grants from the Simons Foundation and McDonnell Foundation to continue this work.