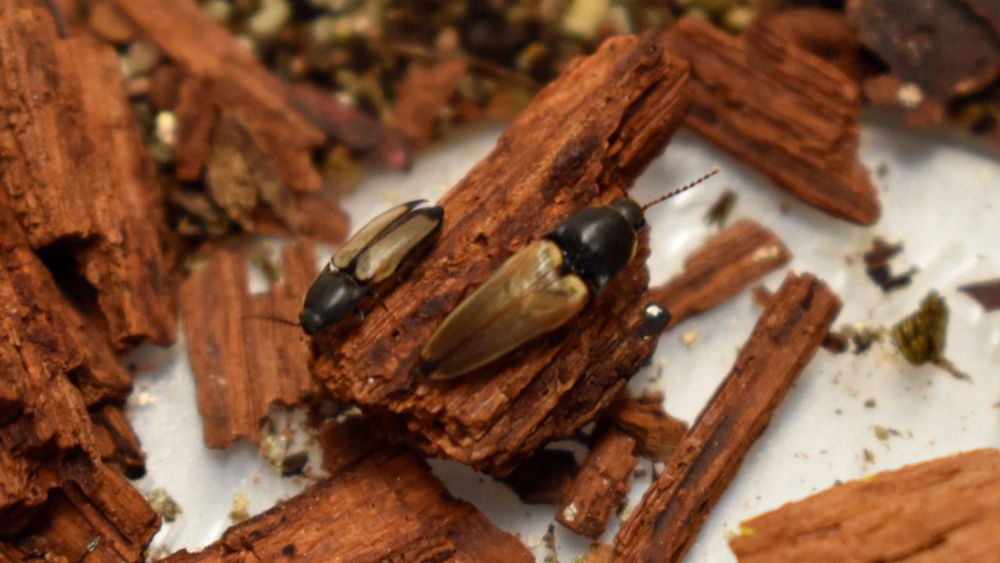 Struggling to right themselves when stranded on their backs, click beetles have a remarkable correction strategy. Arching the joint between the front and second section of the thorax, the beetles suddenly release the deformation and spring spontaneously into the air. Entomologist Marianne Alleyne collaborated with Aimy Wissa, Department of Mechanical Engineering, and others to examine the structure holding the latch structure together.

"The jump is almost vertical, but only 50% of cases result in the beetle landing on its feet," explains mechanical engineer Aimy Wissa, from the University of Illinois Urbana-Champaign, who is fascinated by the tiny insects’ acrobatics. And entomologist Marianne Alleyne, from the University of Illinois Urbana-Champaign, adds, "Considering that insects have a small internal volume and, therefore, limited space for large musculature, it is rather amazing how high they can jump without using their legs to push off the ground." Instead, the beetles depend on a latch structure – situated in the joint between the thorax and the abdomen – which locks the body in position, storing the energy that was released slowly by the muscles that arched the body, ready to be released as soon as the latch lets go. But it was not clear how the two halves of the latch click together, so Wissa, Alleyne and their engineer colleague Alison Dunn teamed up to scrutinize the structure in fine detail.

As there are almost 10,000 click beetle species, the team focused on the beetles that reside in their neighborhoods. "We let colleagues, family and friends know that we were in need of living click beetles," says Alleyne, who recalls how insects were delivered for identification by Alexander Hazel from as far afield as Michigan and Ohio; "even the mechanical engineers got involved," she chuckles. Then, Ophelia Bolmin scrutinized the latch structure of four different click beetles – Alaus oculatus, Parallelostethus attenuatus, Lacon discoideus, and Melanotus spp. – in microscopic detail using environmental scanning microscopy. Meanwhile, Lihua Wei CT scanned the head and thorax region of A. oculatus, P. attenuatus, and Melanotus spp. to learn about the latch's internal construction.