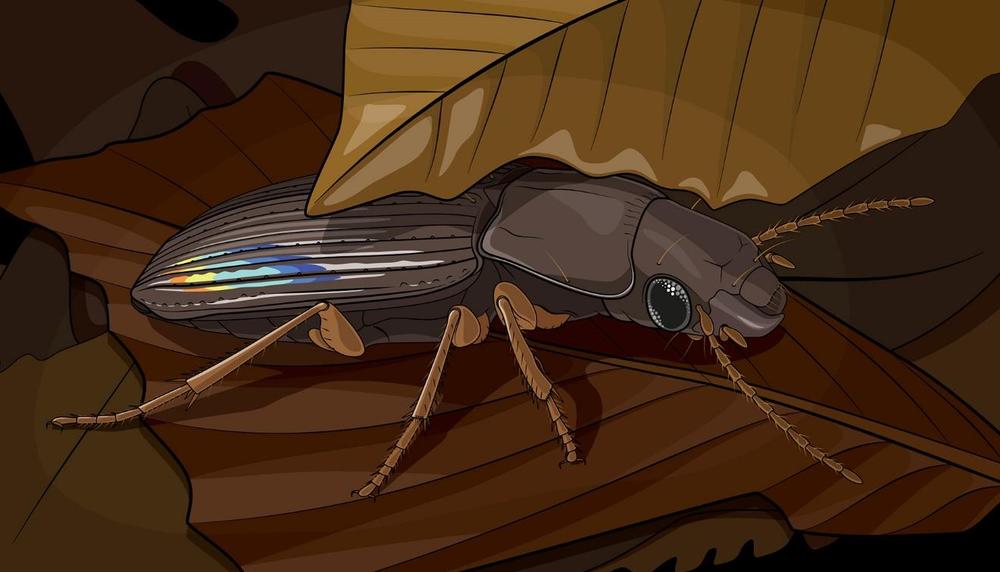 Iridescent appearance is ubiquitous in the insect world, and is used for a variety of functions, such as signaling to a mate or providing camouflage. A new study from the University of Illinois is exploring the link between iridescence and the biomechanical properties of beetles’ cuticle, in an effort to better understand what other functions iridescence might serve.

One of the ways iridescence in beetles occurs is through diffraction gratings, or tiny parallel ridges or slits that disperse white light. This results in the colorful iridescence that we then see. The researchers, from the departments of entomology, mechanical science and engineering (MechSE), and the Illinois Natural History Survey (INHS), collaborated to use scanning electron microscopy and friction experiments to test their hypotheses on beetles from a number of different species. “This was a collaboration that really could have only happened at the University of Illinois,” said study co-author Dr. Marianne Alleyne, assistant professor of entomology. “Our collaborations across colleges are becoming more common and have led to exciting findings and innovations.”

The researchers hypothesized that one of the reasons why some beetle species had these diffraction gratings was to alter friction forces so the beetles could move more easily in their preferred, damp habitats.

“This is not a new hypothesis, but until now scientists haven’t been about to design experiments to test tribological properties,” said Alleyne. “Our colleague Ainsley Seago (NSW Department of Primary Industries, Australia) is an expert on beetle iridescence and provided us with unique insights to develop this study.” Tribology is the study of friction, or the science of interacting surfaces that are in motion relative to each other.

To test whether the diffraction gratings of the beetles’ exoskeletons modified the friction and wettability of the cuticle, the scientists characterized the gratings of difference species obtained from the INHS Insect Collection using scanning electron microscopy and then performed various tribological tests. They measured how the beetles moved across various dry and wet surfaces, and measured how easily water stayed on the surface of the beetle.

“What we found was that different families of beetles have evolved very different types of structures that result in iridescence,” said Alleyne. “For different species, the gratings did result in different friction coefficients, but for others, it did not. This could also be due to the fact that some of the grating structures were so different across species.”

The study is the first of its kind to develop this kind of method and model to study wettability and friction response in very small animals. “What we found with this method was that the combination of both the features of the gratings and the wettability of the cuticle combine to influence the friction coefficient,” said Dr. Alison Dunn, study co-author and assistant professor of mechanical science and engineering. “Our work will ideally provide a background from which more studies can be done to explicitly connect surface features to the behavior of the beetles as they move through their environment.”

The paper, Diffraction gratings alter the surface friction of iridescent beetle cuticle against fibrous surfaces, is published in Biotribology.)