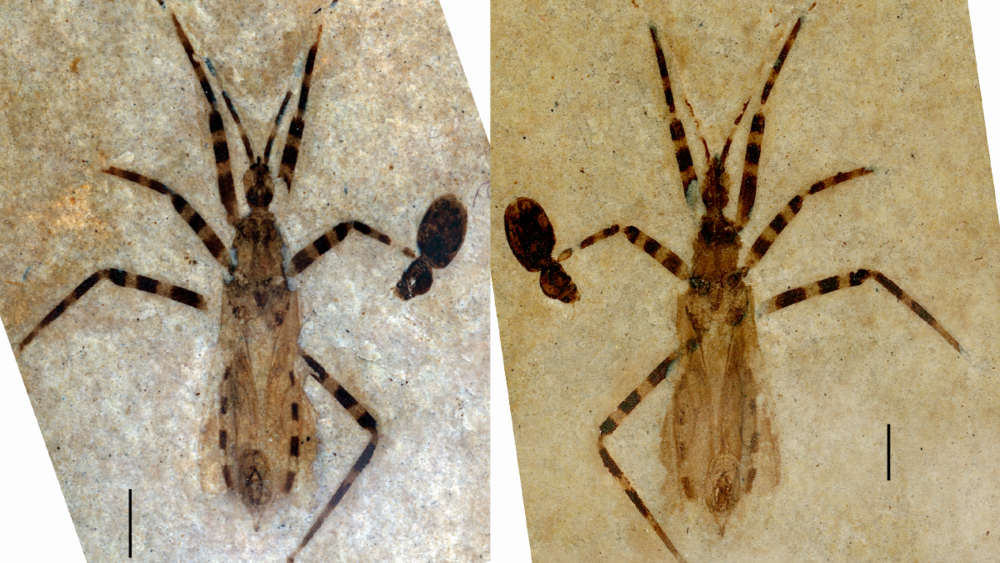 The fossilized insect is tiny and its genital capsule, called a pygophore, is roughly the length of a grain of rice. It is remarkable, scientists say, because the bug’s physical characteristics – from the bold banding pattern on its legs to the internal features of its genitalia – are clearly visible and well-preserved. Recovered from the Green River Formation in present-day Colorado, the fossil represents a new genus and species of predatory insects known as assassin bugs. The find is reported in the journal Papers in Palaeontology.

Discovered in 2006 by breaking open a slab of rock, the fossilized bug split almost perfectly from head to abdomen. The fracture also cracked the pygophore in two. A fossil dealer later sold each half to a different collector, and the researchers tracked them down and reunited them for this study.

Being able to see a bug’s genitalia is very helpful when trying to determine a fossil insect’s place in its family tree, said Sam Heads, a paleontologist at the Illinois Natural History Survey and self-described fossil insect-genitalia expert who led the research with Daniel Swanson, a graduate student in entomology at the University of Illinois Urbana-Champaign.

Species are often defined by their ability to successfully mate with one another, and small differences in genitalia can lead to sexual incompatibilities that, over time, may result in the rise of new species, Swanson said. This makes the genitalia a good place to focus to determine an insect species.

But such structures are often obscured in compression fossils like those from the Green River Formation.

“To see these fine structures in the internal genitalia is a rare treat,” Swanson said. “Normally, we only get this level of detail in species that are living today.”