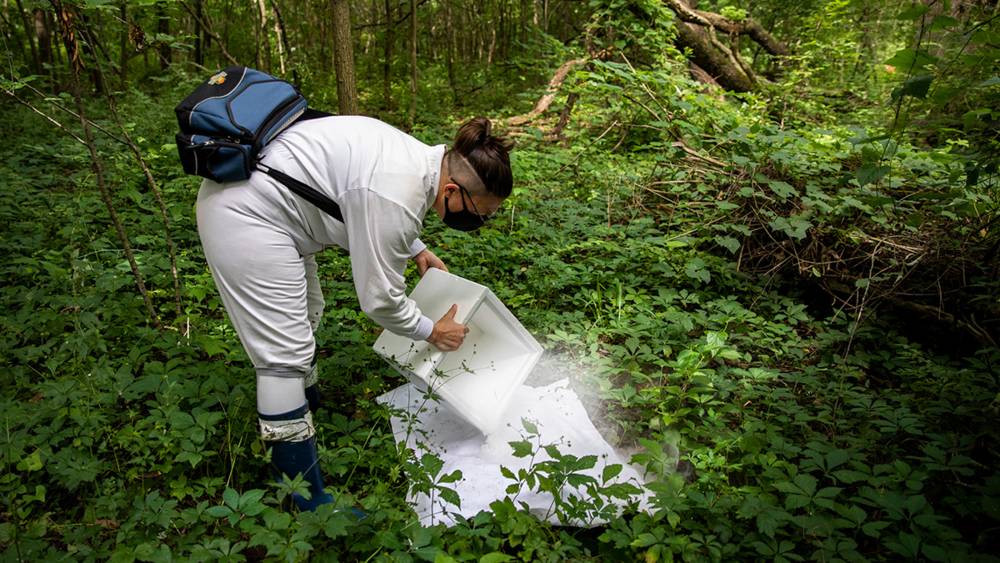 Hunting a creature that hunts me

It’s a sweltering summer afternoon. I’m pushing aside tree limbs and crunching leaves to get back to the trap that I baited two hours ago with dry ice to attract ticks. When I get closer, I can see a gossamer mist hovering over a bright white cloth in the dark underbrush. Dry ice “sublimates” in the open air, going from a solid to a gaseous state. It gives off a vapor of carbon dioxide gas that’s denser than the air, mimicking the breath of a tick host resting on the ground.

When I reach the trap – a square of white cloth on the ground – I see that it’s covered in ticks. Hooray! Quickly though, I realize that I’ve introduced my own CO2 to the scene, along with the added attractant of my body heat. Suddenly, I become the local target of choice for the ticks.

Lone Star ticks on the trap and in the leaf litter nearby begin running toward me and climbing up my boots. Am I surprised? No. They have eight legs! I face down what I call “the fear” and quickly grab my tweezers. I pick the ticks off my boots and from the trap, depositing them into collection vials. Dozens of ticks later, I pack up my trap and leave to go check the next one.

I am here at “tick ground zero” to investigate Heartland virus in Illinois ticks, working with the Illinois Department of Public Health and the Centers for Disease Control and Prevention. We are following up on reports of the first two human cases in the state.

Heartland virus is a dangerous pathogen, first discovered in 2009 in Missouri, that has caused more than 50 cases of human illness in 11 states in the South and the central United States. Human Heartland virus disease often requires hospitalization and is sometimes fatal. Most people with the disease become sick between May and September.

To determine the extent of infected ticks in the wild, we are collecting them at suspected sites of human bite exposure to test for Heartland virus. My colleagues and I are carrying thousands of ticks in our field bags, keeping the bloodthirsty arthropods alive to preserve the virus for testing. In 2019, we found that some Lone Star ticks in Illinois are indeed infected with Heartland virus.