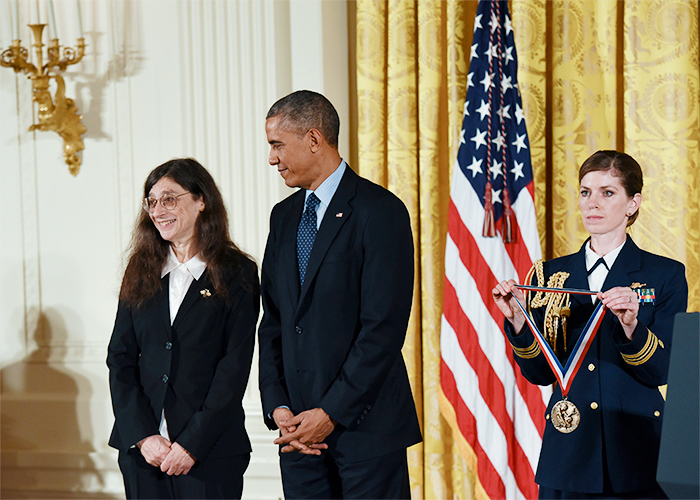 Entomology professor May Berenbaum received a National Medal of Science award from President Obama at a White House ceremony Nov. 20.

CHAMPAIGN, IL. — University of Illinois entomology professor and department head May Berenbaum received the National Medal of Science in a White House ceremony Nov. 20. She was one of 10 recipients of the medal, which honors American scientists “for achievement and leadership in advancing the fields of science and technology,” the White House press office announced.

As she received her medal in the East Room of the White House, Berenbaum was honored “for pioneering studies on chemical coevolution and the genetic basis of insect/plant interactions, and for enthusiastic commitment to public engagement that inspires others about the wonders of science.”

Berenbaum, a Swanlund Chair, joined the U. of I. faculty in 1980. In addition to her ongoing research on the chemical interactions between plants and insects, she is a nationally recognized authority on insects in general, with a recent focus on threats to insect pollinators and pollinator health. She chaired a committee of the National Academy of Sciences on the status of pollinators in North America, and emerged as a spokesperson for the scientific community on declines in honey bee populations around the world.

Berenbaum has written several books on insect fact and folklore, using wit and her own fascination with insect habits to engage readers. She also founded the Insect Fear Film Festival, an annual event on the Urbana-Champaign campus that addresses insect-related fear and loathing and the film industry’s penchant for casting insects as villains.