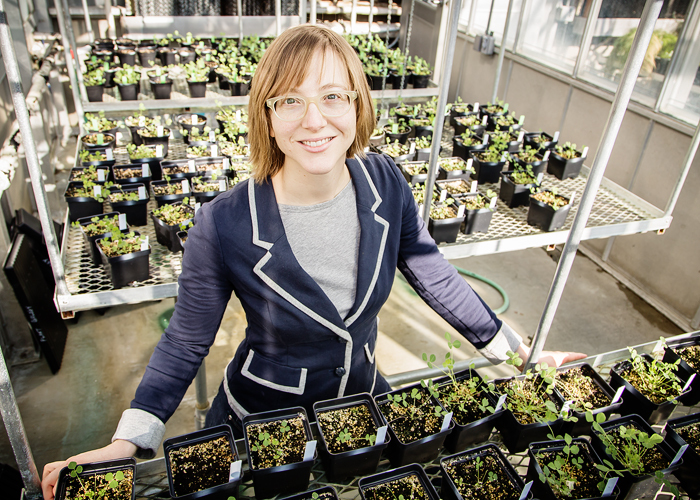 CHAMPAIGN, IL. — When exposed to nitrogen fertilizer over a period of years, nitrogen-fixing bacteria called rhizobia evolve to become less beneficial to legumes – the plants they normally serve, researchers report in a new study.

These findings, reported in the journal Evolution, may be of little interest to farmers, who generally grow only one type of plant and can always add more fertilizer to boost plant growth. But in natural areas adjacent to farmland, where fertilizer runoff occurs, or in areas where nitrogen oxides from the burning of fossil fuels settle, a change in the quality of soil rhizobia could have “far-reaching ecological and environmental consequences,” the researchers wrote.

“The nitrogen that we apply to agricultural fields doesn’t stay on those fields, and atmospheric nitrogen deposition doesn’t stay by the power plant that generates it,” said University of Illinois plant biology professor Katy Heath, who led the study with Jennifer Lau, of Michigan State University. “So this work is not just about a fertilized soybean field. Worldwide, the nitrogen cycle is off. We’ve changed it fundamentally.”

Not that long ago, before the advent of industrial fertilizers and the widespread use of fossil fuels, soil nitrogen was a scarce commodity. Some plants, the legumes, found a way to procure the precious nitrogen they needed – from rhizobia.

“The rhizobia fix nitrogen – from atmospheric nitrogen that we’re breathing in and out all the time – to plant-available forms,” Heath said. “Plants can’t just take it up from the atmosphere; they have to get it in the form of nitrate or ammonium.”

In return, legumes shelter the rhizobia in their roots and supply them with carbon. This partnership benefits the bacteria and gives legumes an advantage in nitrogen-poor soils.

Previous studies have shown that nitrogen fertilizers can affect the diversity of species that grow in natural areas, Heath said. In areas polluted with fertilizer runoff, for example, legumes decline while other plants become more common.

In the new analysis, Heath and her colleagues looked at six long-term ecological research fields at Michigan State University’s Kellogg Biological Station. Two experimental plots were located in each of six different fields. One plot in each field had been fertilized with nitrogen for more than two decades; the other, a control plot, had never been fertilized.

The researchers isolated rhizobia from the nodules of legumes in fertilized and unfertilized plots. In a greenhouse experiment, they tested how these bacteria influenced legume growth and health. The researchers found that the plants grown with the nitrogen-exposed rhizobia produced 17 to 30 percent less biomass and significantly less chlorophyll than plants grown with rhizobia from the unfertilized plots.

A genetic analysis of the microbes revealed that the composition of the bacterial populations was similar between fertilized and unfertilized plots: The same families of rhizobia were present in each. But rhizobia from the fertilized plots had evolved in a way that made them less useful to the legumes, Heath said.

“This study tells us something about mutualisms and how they evolved,” she said. “Mutualisms depend on this balance of trade between the partners, this special nitrogen-carbon economy in the soil, for example. And when the economy changes – say when nitrogen is no longer scarce – these mutualisms might go away.”