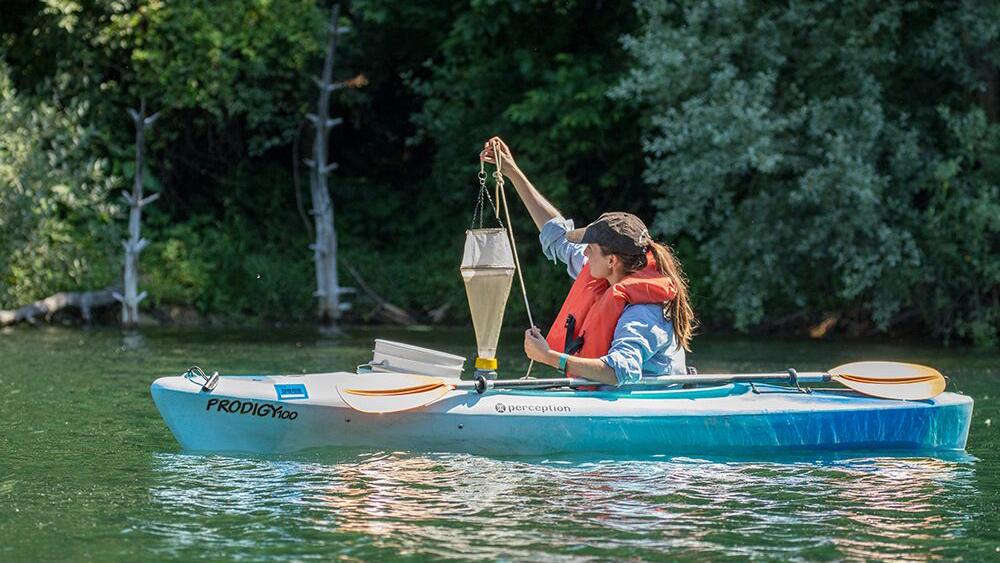 At the intersection of plankton and numbers

Tara Stewart Merrill was studying dance at the University of California—Santa Barbara when one day she helped her friend study for an exam on parasitology. The topic fascinated her, and, to make a long story short, today she is a doctoral student in the Program in Ecology, Evolution & Conservation Biology at the University of Illinois.

Then there is Vanessa Rivera-Quiñones, a doctoral student in mathematics at Illinois, who has always had a love for mathematics because there always seemed to be clear answers. As she became more experienced in the field, however, she learned that isn’t always the case. She learned this after meeting Stewart Merrill.

The two come from very different backgrounds, but they are working together at the University of Illinois to better understand disease in wildlife. It turns out that mathematics is an effective tool for understanding nature—but you need to have expertise in both.

Rivera-Quiñones said that she had never before worked at the forefront of a new scientific discovery that overturned an old assumption.

“For me, that was really exciting,” she said.

For almost two years, the two have been working together with Carla Cáceres, professor of animal biology and director of the School of Integrative Biology, and Zoi Rapti, professor of mathematics, to study disease epidemics in plankton. By combining their expertise, the two have been able to create mathematical models that can evaluate the importance of recovery in plankton-disease systems— work that could not be completed without applying both of their specialties.

Stewart Merrill's role was to bring her biological understanding of how the system works, while Rivera-Quiñones built a mathematical model to test their theories on Daphnia. While interdisciplinary research of this sort brings greater depth of knowledge to a subject, it is not without its challenges. The research pair admitted that it can be difficult studying something that isn’t always within your field.

Rivera-Quiñones thinks of herself as a “forever student” because she loves to learn. While the biological aspects of the Daphnia research were sometimes hard for her to grasp, she loved how much she learned along the way.

“There's no one answer or one size fits all, and collaborating and working on interdisciplinary projects is a way to see that because you get outside of your box quite a bit,” Rivera-Quiñones said.

She noted that it’s beneficial to be working with an expert in biology when she gets stumped by a biological question, and vice versa.

“For me, my experiments are more numerical, so I just play with the parameter and say, “If this were the case, then what would happen?’ Then I can say, ‘Tara, if this were to recover in this way or that way, this is what we should see in nature?’ And then we sort of cross check each other,” Rivera-Quiñones said.

Stewart Merrill has become very interested in what variation within a host species can mean for the transmission of parasites that cause disease. She eventually wants to extend this research beyond plankton because a lot of invertebrates, such as snails and mosquitos, are important vectors for diseases that affect human health. To accomplish this, interdisciplinary work is vital.

“I have observed interesting patterns in my data where disease in plankton cycles up and down through time,” Stewart Merrill said. “The mathematical models that we’ve developed have captured those same cycles, so we can now use our models to develop theory about why those cycles are occurring, then test that theory in the natural plankton system. It is very exciting when the math recaptures the real phenomenon that we were observing in natural systems.”