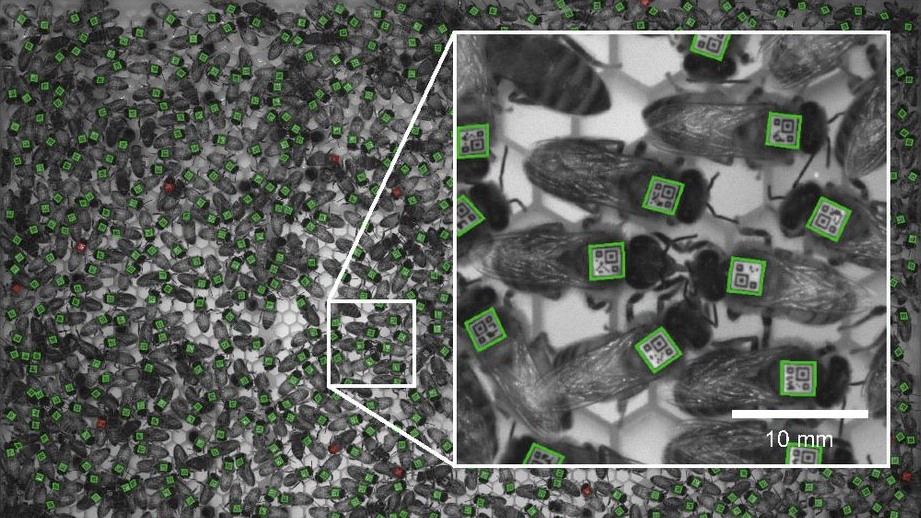 Bees and humans are about as different organisms as one can imagine. Yet despite their many differences, surprising similarities in the ways that they interact socially have begun to be recognized in the last few years. Now, a team of researchers at the University of Illinois Urbana-Champaign, including Gene Robinson, are building on their earlier studies and have experimentally measured the social networks of honey bees and how they develop over time.

They discovered that there are detailed similarities with the social networks of humans and that these similarities are completely explained by new theoretical modeling, which adapts the tools of statistical physics for biology. The theory, confirmed in experiments, implies that there are individual differences between honey bees, just as there are between humans.

The study, which measures the extent of individual differences in honey bee networking for the first time, was carried out by first author physics PhD student Sang Hyun Choi, postdocs Vikyath D. Rao, Adam R. Hamilton and Tim Gernat, Swanlund Chair of Physics Nigel Goldenfeld (BCXT leader/GNDP) and Swanlund Chair of Entomology and IGB Director Gene E. Robinson (GNDP). The collaboration comprised experimental measurements of honey bee social behavior performed by Hamilton, Gernat and Robinson, with data analysis by Rao and theoretical modeling and interpretation by Choi and Goldenfeld. Their findings were published in a recent article in the journal Proceedings of the National Academy of Science.

“Originally, we wanted to use honey bees as a convenient social insect to help us find ways to measure and think about complex societies,” said Goldenfeld. “A few years ago, Gene, Tim, Vikyath and I collaborated on a large project that put “bar codes” on bees so that we could automatically monitor everywhere they went in the hive, every direction in which they pointed, and every interaction partner. In this way, we could build a social network in time, something known as a temporal network.”

That study, done a few years ago, involved high-resolution imaging of barcode-fitted honey bees, with algorithms detecting interaction events by mapping the position and orientation of the bees in the images. In those studies, researchers focused on trophallaxis — the act of mouth-to-mouth liquid food transfer — when measuring the social interactions between honey bees. Trophallaxis is used not only for feeding but for communication, making it a model system for studying social interactions.