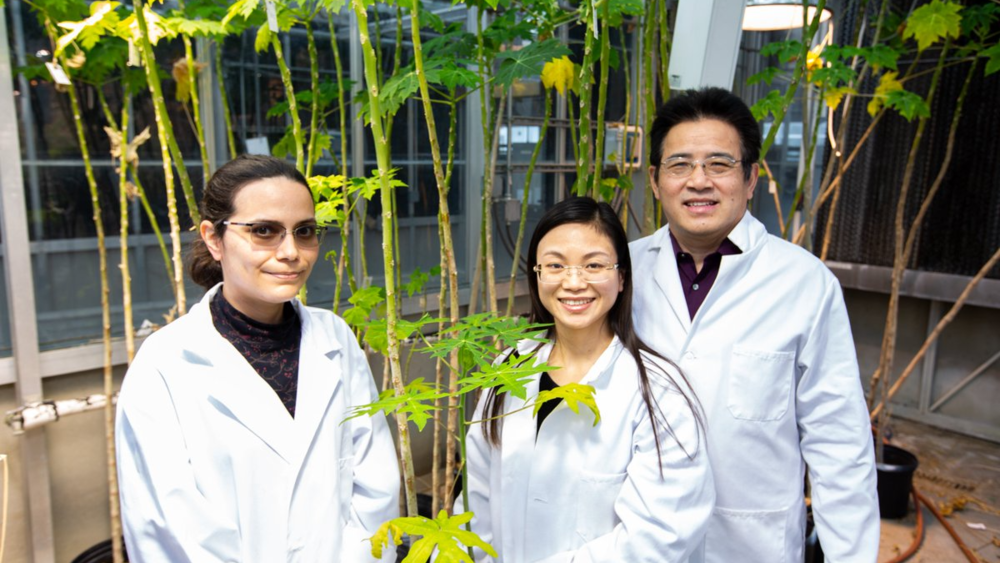 The transgenic papaya “SunUp” was developed in the 1990s and was widely publicized because of its ability to resist the papaya ringspot virus. Although researchers from the Ming group had identified the genomic sequence of SunUp by 2008, it was unclear where the transgenic insertions were and what effect they had. A new study has now identified these changes and how they influence the transgenic plants.

Papaya fruits are a rich source of potassium, magnesium, and vitamins A and C, propelling a steady increase in their global production. Papaya originated and was domesticated in southern Mexico and Central America, and is now cultivated in tropical and subtropical regions worldwide. Wild papaya has small seedy fruits with very little edible flesh, while the domesticated version can weigh more than five pounds. However, there was one major problem: Papaya was susceptible to the papaya ringspot virus, resulting in stunted plants that do not produce mature fruit, and there is no resistance in the papaya genetic code.

To counter this problem, researchers developed the transgenic papaya SunUp, by using a technique called particle bombardment-mediated transformation. Gold particles were covered with the coat protein gene of the virus and shot into the cells of the non-transgenic papaya “Sunset” using a gene gun. SunUp therefore contained gene sequences of the virus, and was protected from infection via RNA-mediated gene silencing.

“It took us 8 years to read each DNA nucleotide in the insertions and rearrangements, and we repeated the sequencing using different technologies to understand the nature of these transgenic insertions,” said Ray Ming, a professor of plant biology and Genomic Ecology of Global Change (GEGC) affiliate. “The insertion was so complex that although we sequenced the genome in 2008, we didn’t know where the transgenic sequences were located.”