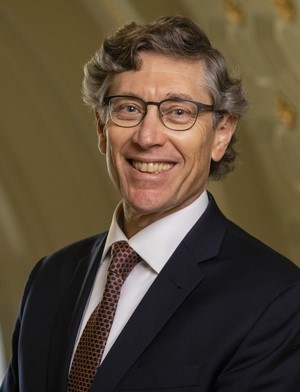 Gene E. Robinson is the Director of the Carl R. Woese Institute for Genomic Biology. He holds a Swanlund Chair at the University of Illinois at Urbana-Champaign, where he has been since 1989. He also holds affiliate appointments in the Department of Cell & Developmental Biology, the Program in Ecology, Evolution and Conservation Biology, and the Beckman Institute of Science and Technology. He received his Ph.D. from Cornell University and was an NSF Postdoctoral Fellow at Ohio State University.

Dr. Robinson’s research group uses genomics and systems biology to study the mechanisms and evolution of social life, using the Western honey bee, Apis mellifera, as the principal model system along with other species of bees. The research is integrative, involving perspectives from evolutionary biology, behavior, neuroscience, molecular biology, and genomics. The goal is to explain the function and evolution of behavioral mechanisms that integrate the activity of individuals in a society, neural and neuroendocrine mechanisms that regulate behavior within the brain of the individual, and the genes that influence social behavior. Research focuses on division of labor, aggression, and the famous dance language, a system of symbolic communication. Current projects include: 1) nutritional regulation of brain gene expression and division of labor; 2) gene regulatory network analysis in solitary and social species to determine how brain reward systems change during social evolution; 3) brain metabolic plasticity and aggression; 4) automated monitoring of bee behavior with RFID tags and barcodes; and 5) learning and memory in relation to division of labor. In social evolution, the sophistication of neural and behavioral mechanisms for the essentials of life--food, shelter, and reproduction--stems from increased abilities to communicate and synchronize behavior with conspecifics. Social insects, especially honey bees, are thus exemplars for the discovery of general principles of brain function, behavior, and social organization.

In addition to serving as IGB Director, Dr. Robinson is also the director of the Bee Research Facility, as well as serving as director of the Neuroscience Program from 2001-2011, leader of the IGB research theme Neural and Behavioral Plasticity from 2004-2011, and interim IGB Director from 2011-2012. He is the author or co-author of over 275 publications, including 27 published in Science or Nature; has been the recipient or co-recipient of over $50M in funding from the National Science Foundation, National Institutes of Health, US Department of Agriculture and private foundations; led the effort to gain approval from NIH for the sequencing of the honey bee genome, pioneered the application of genomics to the study of social behavior; and founded the Honey Bee Genome Sequencing Consortium. Dr. Robinson serves on the National Institute of Mental Health Advisory Council and has past and current appointments on scientific advisory boards for academic organizations and companies with significant interests in genomics.

Dr. Robinson’s honors include: University Scholar and member of the Center of Advanced Study at the University of Illinois; Burroughs Wellcome Innovation Award in Functional Genomics; Founders Memorial Award from the Entomological Society of America; Fulbright Senior Research Fellowship; Guggenheim Fellowship; NIH Pioneer Award; Fellow, Animal Behavior Society; Fellow, Entomological Society of America; Fellow, American Academy of Arts & Sciences; member of the US National Academy of Sciences and the US National Academy of Medicine; and recipient of the Wolf Prize in Agriculture.