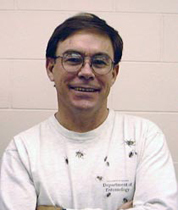 The molecular basis for insect olfaction and taste; insect and arthropod genomics

Robertson works primarily on the chemoreceptors of insects implicated in mediating smell and taste. This repertoire of about 130 proteins in Drosophila melanogaster has changed considerably in other insect like the mosquito Anopheles gambiae, the silkmoth Bombyx mori, and the honey bee Apis mellifera. We are exploring their molecular evolution from as far back as the split with nematodes to close comparisons like the 10 Drosophila species for which genomes are becoming available.

Various other projects involving bioinformatic analysis of gene families, especially exploiting the newly available animal genome projects, are being undertaken, including the name nematode chemoreceptor families, the odorant binding protein family in insects, and the tetraspanin, arrestin, opsin, and other gene families in insect and other animals.

Genome sequences also open the possibility for other kinds of bioinformatic studies, for example of genes that have been lost in Drosophila but are retained in other insects. These in turn can only be studied in these other insects.