(These guidelines are modified from materials developed by C. Caceres for IB 449 Limnology).

Statistics are of little use unless you first have a clear hypothesis and a specific quantitative prediction to test. Consider a simple example. You suspect that herbivores affect the amount of algae present in lake water. You make that a bit more specific and develop a general hypothesis: The presence of herbivores reduces the abundance of algae in lake water. Now you have something you can work with, but it's still a pretty vague notion. What you need to do is apply this hypothesis to a specific system. You know from surveys of local lakes that some lakes have Daphnia (large herbivorous zooplankton) whereas others do not. So, based on your hypothesis, you can now make a specific, testable prediction: The mean abundance of algae will be greater in lakes without Daphnia than in lakes where Daphnia are present. The hypothesis/prediction can be stated formally as follows:

If herbivores affect the amount of algae in lake water, then the mean abundance of algae will be greater in lakes without Daphnia than in lakes with Daphnia.

All predictions are built upon underlying assumptions.

An assumption is a condition upon which the prediction stands, but which is not directly tested. It is a fact taken for granted in an experiment. For example, you might ask whether you have to control for nutrient differences between the lakes with and without Daphnia. Answer: No, you will not be controlling for nutrients in your experimental design. So you assume that the nutrients are either the same in the lakes or that nutrients are not a factor that affects algal abundance.

If you get a significant effect of Daphnia on algal abundance, then at least one of your assumptions must have been valid. HOWEVER, when you get a non-significant result, then you examine your assumptions. Perhaps they were not valid. Perhaps no difference arose because the nutrients were not the same and nutrients were a factor that affects algal abundance. The next phase of the research would be to explicitly test the assumption (turning it into an explicit hypothesis to test next).

So try to think of any underlying factors/arguments that may be present and underpinning your prediction, but not being directly tested. Assumptions are really a part of the logical argument you are building when constructing a hypothesis/prediction.

Now you have to go out, gather data, and evaluate whether or not the data support your hypothesis. Our problem, essentially, is that we can't know the mean abundance of algae in ALL lakes with and without Daphnia. Instead, we have to pick a handful of each type of lake (a sample) and measure algae in each. We then calculate mean (average) algal abundance within each group of lakes and compare the two means. Inevitably one group's mean WILL be higher than the other's, just by random chance. Repeat the last sentence 10 times. If you don't understand why we asked you to repeat that sentence, ASK, this is a key aspect of the entire course.

After you have collected your data and calculated your two means (Daphnia-absent, Daphnia-present), you notice that the mean for the Daphnia-absent group appears to be higher than the mean for the Daphnia-present group. That's nice, but it doesn't tell us much. As we just got through saying 10 times over, one or the other group's mean was going to be greater even if only by random chance. Our problem is to decide, based on the data, whether the difference we observed was likely to be caused by chance alone or whether we can conclude that there probably is some real difference between the two groups.

Statistics help us make this decision by assigning p-values to tests for differences between means. P-values range between zero (impossible for difference to be due to chance) and 1 (certain that difference is due to chance). They can be thought of as the probability that the differences among means observed were caused by chance variation. If the p-value is very small (traditionally, and for this class, < 0.05), you conclude that there is some systematic difference among means. You have measured a difference that was probably NOT caused by chance. "Something else" (maybe grazing by Daphnia?) is going on. You reject the null hypothesis (Ho A = B) and claim evidence for the alternative hypothesis: (HA A>B); algal abundance was significantly greater in the Daphnia-absent lakes than in the Daphnia-present lakes. If, on the other hand, the p-value is > 0.05 there is a good chance that, if you tried the experiment again with two new samples of lakes, you would have gotten the opposite result. You have to accept the null hypothesis. You really have no strong evidence for a difference in algal abundance between the two groups of lakes.

There are three different types of variables: discrete, continuous and categorical. Discrete variables are those that cannot be subdivided. They must be a whole number. E.g. cats would be discrete data because there cannot be a fraction of a cat. We count or tally these data. Continuous variables are those values that cover an uninterrupted and large range of scales. A good example of a continuous variable is pH. It can be 2.4, 7.0, 8.5, etc. - any of a wide range of values between 0 and 14. Categorical variables are arbitrarily assigned by the experimenter. An example of a categorical variable is in an experiment with two treatments: you supplement a certain number of plants with nitrogen (treatment 1), and another number of plants get no nitrogen (treatment 2). So your categorical variable has two levels: nitrogen and no nitrogen. Note that categorical variables have distinct, mutually exclusive categories that lack quantitative intermediaries (e.g. present vs. absent; blonde vs. brown vs. red hair.)

There are several commonly used descriptive statistics to use on discrete and continuous variables. These include the mean (average), variance, standard deviation, and standard error. A brief description of each follows below (Adapted from Hampton 1994).

the average of the squared deviations in a sample or population. The variance considers how far each point differs from the mean. The variance for a population is denoted by σ2 and is calculated as:

The best estimate of the population variance is the sample variance, s2:

Standard deviation: A measure of the average amount by which each observation in a series of observations differs from the mean.

Standard error: A measure of the uncertainty of the estimate of the true mean of a sample that takes into account the sample size. SE = standard deviation /

A chi-square (χ2) test determines whether a relationship exists between two categorical variables. All other statistics (see below) apply to dependent variables that are continuous, i.e. they can take on many different values with an obvious ordering to the values (e.g. a height of 60 is greater than one of 50). Examples are: pH, height, chemical concentration).

Summary: How to Choose Among Statistical Tests: 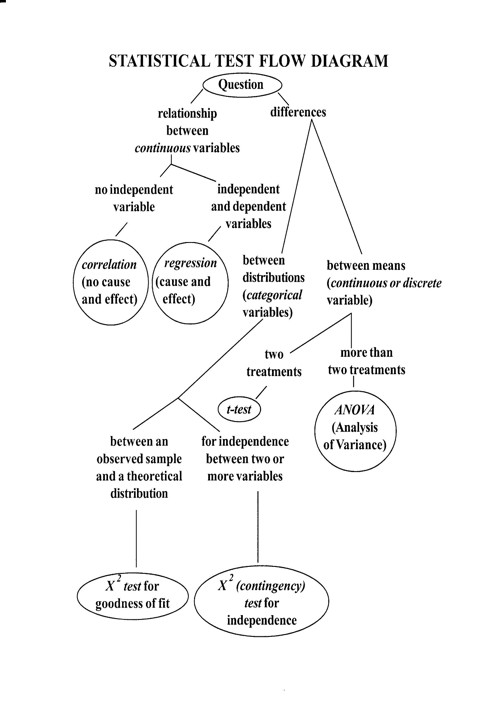